Blog - Latest News
You are here: Home1 / Winston Churchill. Defender of the Realm. 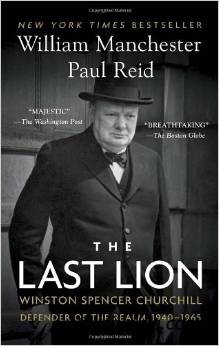 I read (and finally finished) a fantastic book last night called The Last Lion. Winston Spencer Churchill, Defender of the Realm, 1940-1965. This book was mammoth, to say the least- one of the largest books I’ve ever read. My dad asked me how I liked it and I told him it was a love/hate relationship. I loved reading it, all the way to it’s lengthy end. But it took me forever to get there and I’m ready to pick up something else. The book was a bit plodding at times. It’s 1053 pages of pure, glorious history, complete with names, people, and places I’ve never heard of. Two things were required companions to this book (both of which I could get on my iPod Touch)- a dictionary and maps app. I frequently made use of both as I read.

So it’s a long book. But such a fascinating story. Like most people, I know enough about World War Two. I understand the reasons for war, what was at stake, and even a lot of the places and major battles. Both my grandfather’s were veterans and told me stories from their experiences. This book however, was a unique look at the war from a British perspective, something I’ve never had the chance to see. Did you know, for instance, that England carried on alone in the war against Germany a full two years before the United States came to it’s aid? That is just incredible. I mean, think about it. Germany had conquered all of Europe and had a peace agreements with Russia and Japan (ie. all of Asia). They could invest all of their military might towards the little English island. But the English hung on in large part to Churchill’s tenacity and strength. He was the mouthpiece (a loud mouthpiece) for the spirit of the British people and personified their resilience.

The book was a look at the world from a British perspective (from the years 1940-1965), but it followed the life and career of the man, Churchill. Indeed, he was (and is) a man to admire. He held the nation and the world together during this time. He stared down the devil without becoming a devil himself. He gave passionate speeches. He wrote them himself. He cared about normal people, often showing great emotion and weeping alongside them. But he was a man of strength, courage, and boldness. He was just as aggressive as Hitler, only not evil. There’s a lot of learn and admire about such a man.

So who do I recommend this book for? Well, like I said it’s a massive read. It will take you a long time to get through it, not only because of it’s length, but because of the many names, terms, and places that you’ll run into. But I recommend this book to anyone interested in history. It’s a breathtaking read. I was never bored with it. It offers a unique look into British politics, colonialism and it’s downfall. It covers the rise of the super powers (the US and Russia), the struggles of ordinary people during the war, and plenty of detail about military objectives, technologies, and battles during this time. So I would also recommend it to anyone interested in a different look at the world, and the world at war. You will definitely come away with a much higher regard for the British people and Churchill in particular.

This was such a fascinating book to read through. I feel that the biggest thing that I’ll get out of this book is not so much a look at one particular person (Winston Churchill), but a lasting impression of a people and time period as a whole. The strength of this book is that it allowed me to relive their experiences and struggles. I could really put myself there and feel the fear, feel the struggle, the defiance, the weight of decisions, and eventually the triumph of victory. What a journey. What a people. What a time to live. Give this book a read and experience something new. It will give you a better appreciation and context for the times we live in now. Definitely recommended, just prepare to do battle.