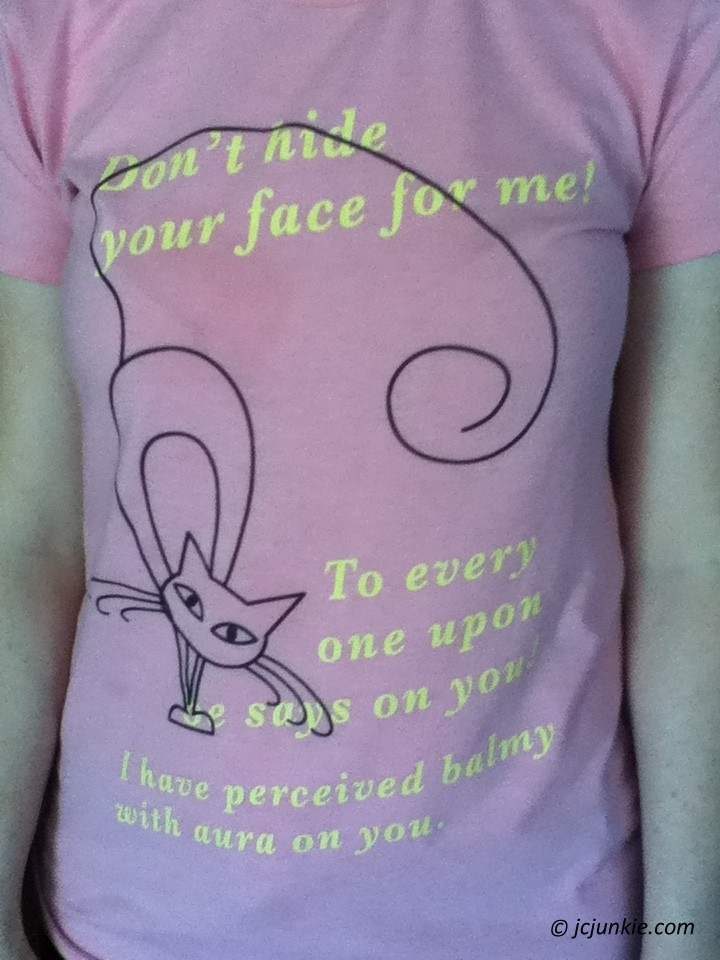 Gotta love Indonesian t-shirts. In their vain attempts to be ‘cool’ they oftentimes try to put English writing or text on the front. Just the simple fact that it has English writing means that the wearer is ‘hip’, ‘worldly’, and maybe even rich. It makes them look American. But you just gotta love their attempts at the English language. For example, Kim bought a t-shirt that has a cat on the front which says:

Don’t hide your face for me!

To every one upon be says on you! I have perceived balmy with aura on you.

Yes, a t-shirt actually says that. And any guess what that actually means? No, we don’t know either. But that’s the funny thing. It doesn’t matter! It doesn’t matter that it makes no sense. Kim and I stood in the checkout line laughing and snickering to ourselves at what a funny, stupid little t-shirt it was. It was so funny we just had to buy it. The checkout girl was giving us some curious looks so we tried to explain to her that the t-shirt made absolutely no sense. I didn’t seem to register with her. Guess it’ll have to be an inside joke.

Another one of Kim’s t-shirts that she purchased here again has a kitten on the front (what’s with Indo shirts and cats?) and it says:

Okay, that one at least makes a little sense. A little weird, yes, but at least it’s mostly grammatically correct. And the fact that it has a kitten on the front leads you to believe it’s referring to the kitten.

I forgot to mention that these shirts cost about $2 a piece. Any more and I don’t think we’d buy them. Indonesians buy them because it makes them look cool and hip. We buy them because they’re ridiculous. I guess the jokes on them.

— Francis Bacon
Word Scramble. Talk Like Yoda They Do!