Blog - Latest News
You are here: Home1 / Toys and Culture. 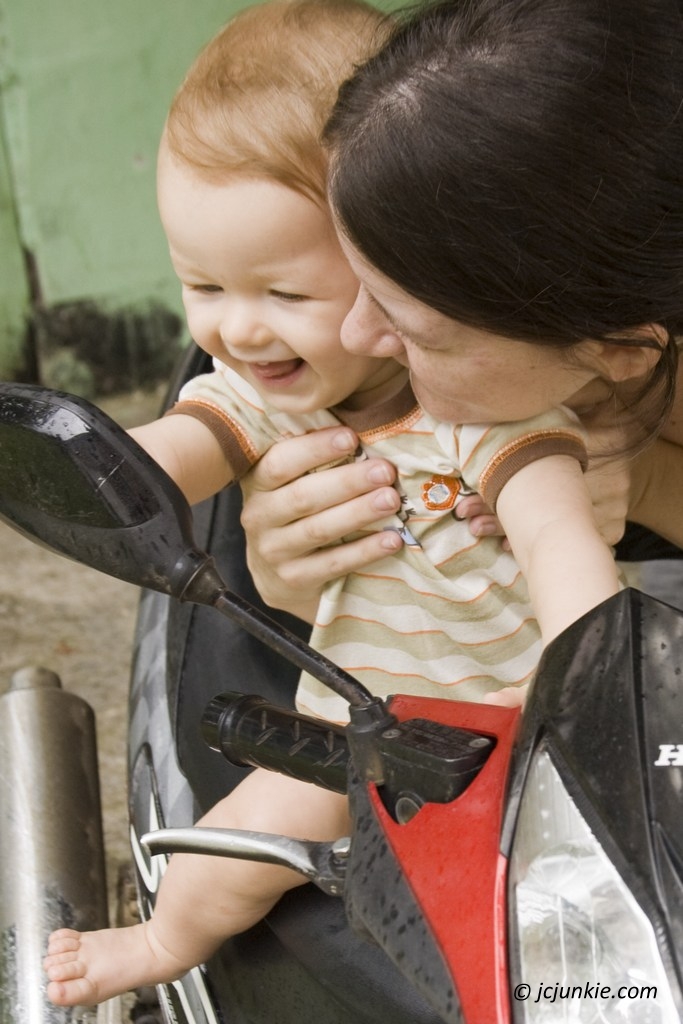 Toys are an interesting part of another culture, a window into someone else’s worldview. You can tell a lot about people based on their toys. This is true even here in Indonesia, however in this case it’s their lack of toys that is revealing.

I’m always amazed at how the kids from our neighborhood come over, gawk at, and admire Eli’s toys. These kids are much older than Eli but they find his small play area an area of wonder and fascination. We have scattered around the floor various things like blocks, balls, stuffed animals, little cars and people, puzzles, etc. We didn’t have much at first. Traveling across oceans has put a limit on what we’ve been able to bring with us. And what we can buy is limited too. But in the last several months since we’ve come back, Eli has inherited a few other things from Western families- bigger items we would’ve have been able to fit in a suitcase. These are the things our neighbors find most interesting. They come over to ‘play with Eli’ but they always go right to the mechanical plastic toys, the ones with the moving parts and batteries. It’s interesting to watch the kids. Even though the toys are probably intended for babies and toddlers, the older kids love em! They pick them up, turn them around, and age isn’t a factor at all.

My eyes are opened to a whole new world- a lifestyle I can admire even if I’ll never be able to imitate it.

When I see the kids get such a kick out of Eli’s baby toys it’s makes me realize all over again that I come from such a different culture. In their culture, having A TOY, one single toy, is about all they can expect. Toys are a privilege, something above and beyond what’s normal. Having more than one would mean you’re super rich, or excessive, or both. And then I look at the stuff around me- all the stuff we’ve been able to accumulate in our small house over the past three years, and it’s just remarkable. Even though we’ve been limited by what we can buy because a) it just doesn’t exist, or b) it won’t fit on our motorbike or in our suitcase, we still have a lot. By American standards I’d say we have less than most. But compared to those around us, our Indonesian friends and neighbors, we still have so much more. It just makes me realize how much we accumulate, and how fortunate we are to have so much stuff. And my eyes are opened to a whole new world- a lifestyle I can admire, even if I’ll never really be able to imitate it.

Indonesian children teach me that we really don’t need all this stuff to get by. It’s possible to live a much simpler life and be content. They make up for their lack of toys with creativity and ingenuity. It’s fun to watch them play in our front yard. The other day two neighbor boys made a game out of jumping and rolling on an old barrel that appeared in our yard one day. It occupied them for hours. And then another day a patch of leftover sand from a cement project became an impromptu sandbox. Other times I see them playing with sticks and string and paper kites. Some days they come over just to interact with Eli, even if it’s just to make him smile. It’s pretty amazing what they come up with to do, even though they start with nothing.

I’ve been blessed to see this side of life, and I’ve been challenged to do it their way. Eli at 11 months may have more toys than our 6 year old neighbor. I can’t help that. It’s our culture. But I can learn to give and share with those who don’t have as much as me. And by giving it away I’m the richer for it.

Friendship is born at that moment when one person says to another, “What! You too? I thought I was the only one!”

Trumpet and Guitar. Music is Who You Are, Not What you Play.
Scroll to top